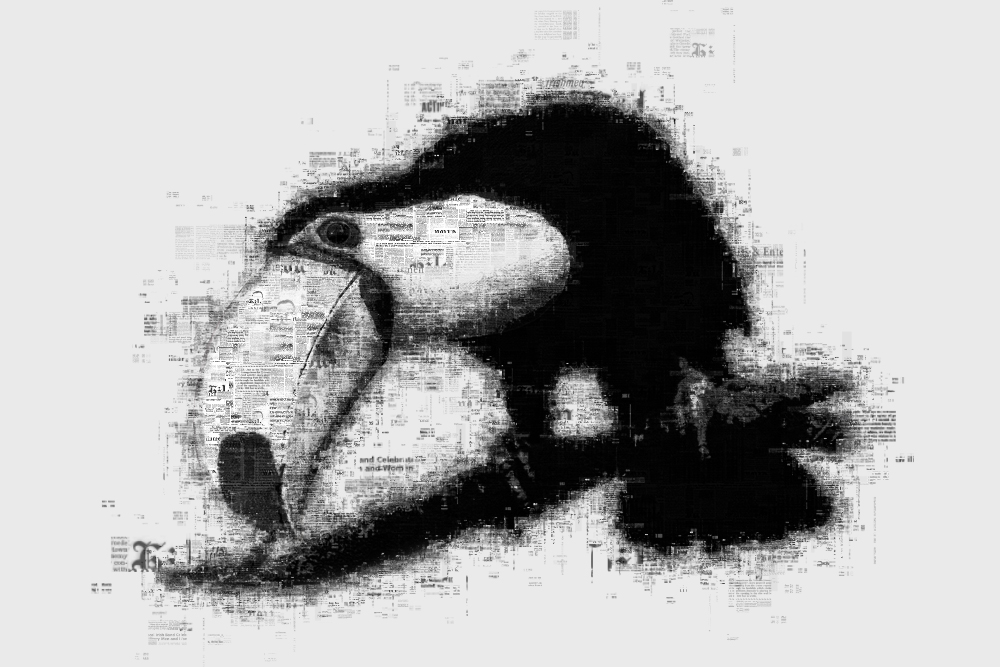 Had to try something new with my photos and Photoshop. It was a time-consuming search. 3 photos in this blog. I wanted more, but I did not succeed. Why that is, you can read below.

The idea was to do something digital with newspapers. It seemed a nice idea to me and I thought it would not be that difficult. The first image went well. I had help from an action in Photoshop: Newspaper art

Coincidentally, I took this photo of a toucan first. A photo that I took in December in Avifauna. I thought it was a nice result. Let’s try another photo …. And that’s where I got stuck. I did not get a result with any other photo that I liked. I think that is caused by the clors and the hair/feathers. There is too much structure, which makes the result too vague. It will probably go better with human portraits. But that is not my thing 😛

Time to try something else. I found inspiration and the technique in this video: Video of Phlearn. To achieve the following result, I spent hours editing and searching. Partly because I am a hair-splitter and stubborn and because also for this technique an animal photo is not ideal. A man with a beard and glasses is edited in the video. Great contrasts and color differences. You will have clear forms and a recognizable face without much effort. My chimpanzee is completely dark colored. As a result, the system with the filter gallery did not work. The face of Vakanga became a uniform color with two nostrils and two eyes. No further shapes. So I used another technique. This technique: Video with explanation about the stencil effect in Photoshop. After a lot of trying and tinkering with contrast etc., I had the basis with folders in Photoshop, in which I had to paste the newspapers. And then I came up with something else.

My portrait had to get a link with nature conservation and with one of my heroes in this world Jane Goodall. Then you have a new challenge. Finding suitable images of newspapers to use is not easy. Certainly not if it also has to be connected with nature conservation and Jane Goodall. After a lot of searching, I opted for a compromise. There are a few pieces with Jane and some neutral newspapers that are not about war and other misery. I wanted positive images. There are 3 photos of Jane. See if you see them 🙂

Here below the result. Title: Vakanga..

Vakanga is a chimpanzee lady I photographed with her son in Osnabrück Zoo a few weeks ago. I am still not sure about this image. I might try again.

Finally, an image with a technique that works with animals. Something that I shared earlier. New is the use of this snowy owl. A photo that I made two years ago in ZOOM Erlebniswelt in Gelsenkirchen. Extra this time: text. I have not found beautiful texts on newspapers. That’s why I used a page from a book and music paper.

My sons and I were huge fans of Harry Potter. They grew up with the stories and films. We have seen all the films together. Beautiful memories. Therefore the link to the snowy owl of Harry Potter.